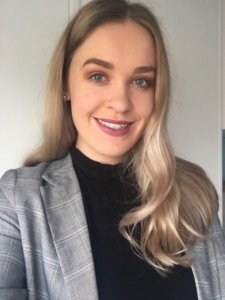 Epilepsy is a neurological condition characterised by seizures (sudden, uncontrolled electrical disturbances in the brain). The communication of messages from our brain to other parts of our body is dependent on the transmission of electrical signals between neighbouring cells of the brain. They transmit this electrical signal by moving positively and negatively charged salts (ions) in and out of the cell in a finely tuned and rhythmic manner. These salts move in and out of the cell though pores in the cell surface called ion channels. When the movement of salts through these ion channels is irregular or erratic, this can cause a disruption in the transmission of the electrical signal and lead to the life-threatening seizures seen in patients with epilepsy.

Rachel is studying a rare form of childhood epilepsy that is caused by a genetic mutation in one of these ion channels. As she explains “My PhD research focuses on a rare, genetic form of epilepsy in children called KCNQ2-related epilepsy. This type of epilepsy usually begins in the first few days or weeks of a child’s life. The symptoms can range from mild to severe. These include seizures, intellectual disability, mobility and breathing issues and autism”.

This type of epilepsy represents a major treatment challenge as patients often do not respond to medication. The treatment options are often extremely limited because the precise mechanisms underlying the condition are poorly understood. As Rachel explains “My research aims to gain a better understanding of epilepsy in humans, in the hope of discovering more effective drugs to help treat these children”.

In the past, it has been extremely difficult to study the underlying causes of the genetic types of epilepsy as it would require the isolation of cells from the brain. At the Regenerative Medicine Institute, they have established lab-based systems that allow them to mimic the specific problem affecting patients with epilepsy and study it in detail.

Rachel will use an innovative method whereby skin cells taken from patients with this rare form of epilepsy can be turned into brain cells or neurons. This is done by first rewinding the biological clock of the skin cell and ‘re-programming’ it to be an embryonic stem cell-like cell, which have the potential to turn into any type of cell. Rachel explains further “In 2007 a scientist called Yamanaka made a ground-breaking discovery which has revolutionised our ability to study these cells outside the body. This technique allows us to collect a small sample of skin from patients and reprogram the cells found in our skin to become neurons, the cells found in our brain; and be used as a model to test for new drugs as well as understand disease”.

The patient-specific brain cells are grown and placed beside state-of-the-art microelectrode arrays that have been established at the Regenerative Medicine Institute.  An electrical current is passed across the array and the electrical activity of the brain cell is measured. Essentially, Rachel will be able to measure the firing of the brain cell in a dish in the lab. Using this system, she will characterise the patient-specific brain cells in detail and test whether she can repair the error that is causing the seizure within in the lab.

Ultimately, Rachel’s study will enhance understanding of mechanisms, offer human stem cell models of severe epilepsy for testing efficacy of candidate drugs and open avenues for novel drug discovery. “Our hope is that this research will lead to a greater understanding of this disorder in humans; it is hoped that this research will facilitate models for the discovery of new drugs for patients”.