Our Researchers in Focus for December are Prof. Tracy Robson and Dr Stephanie Annett. Tracy is Head of the School of Pharmacy and Biomolecular Sciences at the Royal College of Surgeons in Ireland. She is funded through the National Children’s Research Project Grant scheme for her project “Unravelling the role of FKBPL in Childhood Obesity”. Stephanie is the postdoctoral researcher working on the project.

Childhood obesity is a major health concern worldwide. “Childhood obesity is one of the most serious public health challenges of the 21st century. Globally, in 2015 the number of overweight children under the age of five, is estimated to be over 42 million and could reach 70 million by 2025” explained Tracy. It is a particularly serious health issue in Ireland. “Obesity levels in Ireland have more than trebled in the last 30 years, with Ireland having the worst projected obesity problem, compared to the twenty-seven other European Union countries, by 2030” said Tracy. 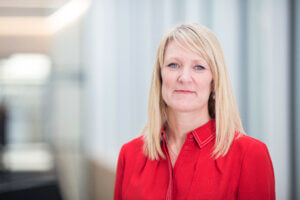 The rise in childhood obesity will likely have long term consequences. “Obesity during childhood and adolescence tracks into adulthood and has been shown to increase the risk of chronic illness, such as cardiovascular disease and cancer leading to premature death” said Tracy.

The causes of obesity are complex with many drivers including environmental and genetic factors. Our knowledge of the genetic causes of obesity is constantly progressing but there is still more to learn. “It is estimated that up to 70% of inter-individual variability in BMI has been attributed to genetic factors. Rare single-gene defects that cause severe obesity from early childhood such as leptin deficiency have been well characterised. However, it is more common that people have multiple genes that predispose them to weight gain, particularly in our modern-day society with an obesogenic diet and sedentary lifestyle. This lack of understanding has impeded the development of new and much needed treatment options or interventions for children who develop obesity” explained Tracy.

Tracy’s research group are interested in the FKBPL gene and the protein that it encodes for, FK506 – binding protein like (FKPBL). Tracy discovered this gene and protein in late 1990s and has since worked on characterising its functions. Tracy has shown that FKBPL has an anti-cancer effect. “FKBPL inhibits cancer growth by inhibiting the growth of blood vessels”.

Working with Almac Discovery, the discovery arm of Almac Sciences a pharma company based in Craigavon, Northern Ireland, an anti-cancer drug (ALM201) based on FKBPL was developed collaboratively. “The part of the FKBPL protein that inhibits blood vessels from developing, was identified and developed into a drug which was shown to be safe in a Phase I cancer clinical trial”.

When studying mice with only as single copy of the FKBPL gene (FKBPL+/- mice), Tracy made an exciting discovery relevant to obesity research. “FKBPL+/- mice gained more weight on both a normal and high fat diet compared to normal mice, despite the same food intake”. Tracy has also shown that these findings are relevant to humans. “When we measure FKBPL levels in the blood of children with obesity, it was significantly lower compared to lean children”.

These results suggest that low levels of FKBPL are strongly associated with childhood obesity. In their NCRC funded research, Tracy and Stephanie aim to further explore the molecular mechanism(s) through which FKBPL influences the development of obesity.

The project has three major aims. Firstly, in collaboration with Prof. Declan Cody and Dr. Andy Hogan, Tracy and Stephanie will measure serum levels of FKBPL in a larger cohort of children with obesity, including children with additional complications such as type I diabetes. “This [the levels of FKBPL] will then be correlated with clinical information, such as weight, fasting insulin and glucose and cholesterol” and allow the team to determine if FKPBL levels can “predict which children are a risk of obesity related diseases” explained Stephanie. 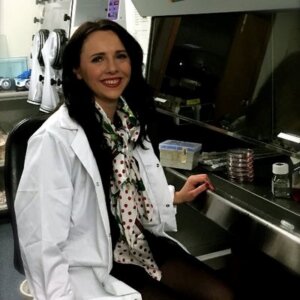 Secondly, they will explore the role of FKBPL in directly facilitating the development of fat tissue “using the fat cells grown in the lab and tissues taken from the FKBPL+/- mice” says Stephanie. Blood vessel development is required for the expansion of fat tissue, a process FKBPL has been shown to inhibit. They will also look at how FKBPL influences inflammation as “Obesity is associated with a recruitment of immune cells and increased inflammation in adipose tissue” said Stephanie.

Thirdly, they will explore the effect of FKBPL-based treatment on weight gain. Stephanie explained further; “We will treat FKBPL+/- mice and normal control mice with an FKBPL based drug and assess weight gain and metabolic activity”. They will then perform similar studies in mice that lack FKBPL in specific cells types as “This will tell us what cell type is the target for FKBPL based drugs in the treatment of obesity”.

Together, these studies will further define the novel and unexpected role of FKPBL in obesity.  “Ultimately, we hope that insights into how FKBPL is important in children with obesity may provide new diagnostic and treatment options for these children” stated Tracy.