Our Researcher in Focus for November is Prof. Séamus Hussey, consultant paediatric gastroenterologist at Children’s Health Ireland, Crumlin and Senior Lecturer in the Department of Paediatrics at the Royal College of Surgeons in Ireland. 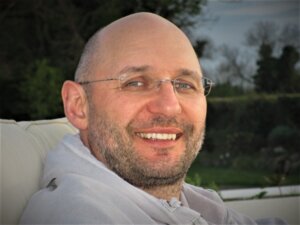 Séamus leads the National Children’s Research Centre-funded DOCHAS study (Determinants and Outcomes in CHildren and AdolescentS with Inflammatory Bowel Disease). Ireland, uniquely, has a single national referral centre that looks after all children and adolescents with gastrointestinal diseases, based in Children’s Health Ireland, Crumlin. This enables unrivalled population-based paediatric translational research to be undertaken.  DOCHAS, the Irish word for hope, is a longitudinal clinical study that prospectively recruits all children and adolescents with newly diagnosed inflammatory bowel disease and follows the progression of their disease and treatment outcomes through to adulthood.

Paediatric inflammatory bowel disease results in chronic inflammation of the gastrointestinal tract, and occasionally other organs. The two main subtypes are ulcerative colitis and Crohn disease. Ulcerative colitis results in inflammation of the lining of the colon (large bowel). The entire colon is involved in most young patients, in contrast with adult patients. Crohn Disease displays a different pattern of chronic inflammation which extends beyond the lining of the intestine, potentially affecting any segment of the intestine from the mouth to the anus.

Since DOCHAS started in 2012, over 1000 children have been recruited through the National Centre for Paediatric Gastroenterology at Children’s Health Ireland, Crumlin. Throughout the course of their care, clinical data (e.g. treatment outcomes, disease complications, patient wellbeing) and biological samples (e.g. DNA, blood, gastrointestinal biopsies) are collected.  Séamus’ vision in developing DOCHAS was to bring together clinical and scientific expertise and foster high-impact collaborative research outputs that would benefit patients –“an Irish thumbprint with a world-wide footprint”. The tandem approach of gathering robust clinical data and biological samples has established this unique prospective translational research platform, from which researchers can study factors that potentially cause, modify or treat inflammatory bowel disease, including factors that contribute to poor clinical outcomes and treatment failure.

The incidence of inflammatory bowel disease in Irish children has trebled since 2001 and continues to rise, with over 120 new cases diagnosed each year. Symptoms may include abdominal pain, bloody diarrhoea, fatigue, weight loss and malnutrition and as Séamus explains “It is a debilitating condition that has a significant impact on a child’s quality of life and can lead to major complications that may require surgical intervention”.

The exact causes of Crohn Disease are unknown. Emerging research on diet as an environmental factor that can be modified has led to the development of effective diet-based treatments. Exclusive Enteral Nutrition (EEN) is a specially prescribed 6-8-week course of balanced nutritional drinks that can promote disease remission. “For children with Crohn Disease, one of the most effective treatments available to kick-start a return to health is a ‘natural-based’ treatment. The majority of patients who avoid all usual food and take a specially prescribed course of blended drinks for 6-8 weeks enter remission”.

While effective, EEN is only a short-term solution for Crohn’s Disease as its use is limited by issues with compliance, palatability and the lack of additional treatments that can help sustain remission after the EEN course. “Despite the effectiveness of this therapy, most patients seem to struggle with the absence of regular food for such a duration. This limits the use of the therapy to children-and parents- with high motivation, and to specialized centres who can support an exclusive enteral nutrition program”.

Séamus is leading the Modified-EEN (MEEN) trial at Children’s Health Ireland at Crumlin. This is an international trial that explores the benefits of a new diet-based treatment for Crohn’s Disease; partial EEN plus Crohn’s Disease Exclusion Diet (CDED). CDED is a whole food-based diet rich in fibre and resistant starches that was developed by Prof. Arie Levine (Tel Aviv University, Israel). CDED has also been shown to promote remission in children with Crohn’s Disease. The MEEN trial will determine whether progression from standard EEN (weeks 1 -2) to partial EEN plus CDED (weeks 3 -14) to full CDED (weeks 15-24) can sustain prolonged remission in children with mild to moderate Crohn’s Disease compared to the standard 6-8-week treatment with EEN.

In a unique sub-study of the MEEN trial, Séamus is also analysing the oral microbiome (the population of “bugs” found in the mouth) of study participants. The gut microbiome has been linked with the development of Crohn Disease and dietary therapy (EEN) has been shown to have a significant impact on the gut microbiome in patients with CD. However, there is limited information on the role of the oral microbiome. “We will study the population of bugs that live in the mouths of these children, to see if there are differences from healthy children. We will also see if the combination of bugs changes with either treatment strategy or by 1 year following treatment and try to link any changes in bug populations to how the children are doing medically at 1 year of follow up. If successful, this will open an opportunity for an alternative longer-term dietary treatment strategy for children and identify novel biomarkers of favourable disease outcomes using a simple mouth swab”.

Patient recruitment to the MEEN trial is ongoing with results expected in 2021/2022. When complete, the study will advance our understanding of the underlying causes of Crohn Disease and potentially expand the possible diet-based treatment options for children.

More information on Séamus’ research can be found through the following links: