Our next “Researcher in Focus” is James O’Donnell, Professor of Vascular Biology, Director of the Irish Centre for Vascular Biology, and the Principal investigator of the highly respected Haemostasis Research Group, in the Royal College of Surgeons in Ireland (RCSI). James is funded through the National Children’s Research Centre Paediatrics Research Project Grant scheme to investigate the role of the blood clotting protein von Willebrand factor in cerebral malaria. 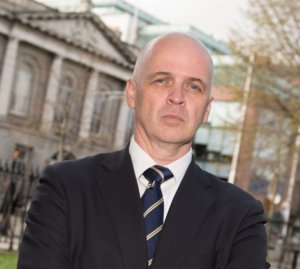 Malaria is an infectious disease caused by Plasmodium parasites, typically transmitted through the bites of female Anopheles mosquitoes. The global morbidity and mortality caused by malaria infection are staggering. Between 300 million and 500 million cases of clinical malaria occur each year, resulting in more than 500,000 deaths. Most of these deaths (~80%) occur in African children under the age of five. Consequently, malaria constitutes one of the leading causes of death in young children worldwide.

Following a bite from an infected mosquito, Plasmodium parasites are released into the bloodstream. The parasites travel to the liver where they mature and multiply and are subsequently released back into the bloodstream where they infect, multiply within, and destroy red blood cells. This process leads to symptoms such as fever, chills, headaches, nausea and vomiting, and muscle pain and fatigue. However, in severe cases of malaria infection, a life-threatening neurological complication called cerebral malaria (CM) can develop.

James explains “Young children with CM typically present to hospital with severe headache and drowsiness. Unfortunately, as the malaria infection worsens, the children rapidly progress to develop confusion, decreased consciousness and eventual coma. Although effective anti-malarial drugs have been developed, CM still proves fatal in up to 20% of children. Furthermore, another 20% of children who survive CM are left with long term brain injury that causes learning difficulties and memory impairment”.

The development of cerebral malaria is poorly understood, and this lack of understanding has impeded the development of new and much needed treatment options for children who develop CM. To further investigate the biology underlying CM in children, James and colleagues have established a Malaria Research Consortium that includes collaborators in Dublin, the Liverpool School of Tropical Medicine, University of Sydney and Blantyre in Malawi.

A major focus of the Malaria Research Consortium is the clotting protein von Willebrand Factor (VWF). VWF is released from the Weibel Palade (WP) bodies of activated endothelial cells (the cells that line our blood vessels) and the α-granules of platelets. It plays an important role in haemostasis, the prevention of blood loss following injury to a blood vessel, by facilitating platelet adhesion and aggregation.

The Malaria Research Consortium has found that malaria infection is associated with increased levels of ultra-large VWF (UL-VWF) multimers within blood. Platelets bind to these ULF-VWF multimers. In turn, malaria-infected red blood cells bind to activated platelets. This can lead to increased endothelial cell permeability and the blockage of small blood vessels. James commented “We have identified an entirely new pathway through which malaria-infected red cells in the blood can stick to the walls of blood vessels in the brain, and thereby cause blood vessel obstruction”. 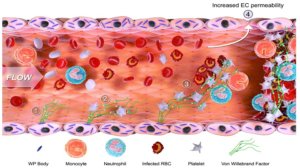 Proposed mechanism through which VWF is involved in the pathogenesis of cerebral malaria. (1) During the course of a malaria infection, endothelial cells (EC) are activated and release highly reactive ultra-large VWF (UL-VWF) multimers. (2) Platelets adhere to these UL-VWF multimers and become activated. (3) Malaria infected red blood cells (RBC) bind to activated platelets leading to (4) increased endothelial cell permeability and (5) the blockage of small blood vessels within the brain.

This works builds on the growing body of evidence supporting a role for clotting proteins in a range of biological processes, not only haemostasis and thrombosis “For many years, the importance of blood clotting proteins in patients with bleeding or thrombosis has been known. However, in recent years, it has become clear that these clotting proteins can also play other important biological functions, and in particular affect immune responses. By unravelling how these additional functions happen, we have the potential to develop new therapies for lots of common and important illnesses”.

Further information on James’ research on cerebral malaria can be found through the following links: