Our Researcher in Focus for December is Dr Sarah Geoghegan, a paediatrician who specialises in Infectious Diseases. She is currently an NCRC Clinical Research Fellow undertaking a PhD at the School of Medicine in UCD. Under the supervision of Prof. Karina Butler (UCD and Children’s Health Ireland at Crumlin) and Dr Andrew Steenhoff and Dr Kristen Feemster (Children’s Hospital of Philadelphia), Sarah is studying global perspectives on vaccination against Group B Streptococcus in pregnancy. 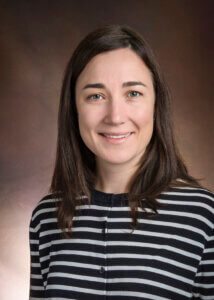 “Group B Streptococcus, sometimes referred to as GBS, is a bacteria that is present in the vagina of up to 25% of pregnant women. About half of women who carry this bacteria will pass the bacteria to their babies during delivery. For most babies, this causes no harm but in about 1% of cases the baby can develop very severe infections such as meningitis, blood stream infection or pneumonia. There are about 50 cases of severe Group B Streptococcus infection in babies in Ireland each year” explains Sarah.

The treatment of Group B Streptococcus can be complicated by a number of factors.

“This infection can occur immediately after birth, known as “early onset” or it can be late onset, meaning that it occurs after 7 days of life. Early onset disease can be prevented if women who are known to be carriers of Group B Streptococcus are given antibiotics during labour, however this does not prevent late onset infection. Identifying which women need antibiotics can be difficult as Group B Streptococcus can sometimes come and go. Moreover in many parts of the world testing women during pregnancy and giving antibiotics is not feasible due to limited resources” said Sarah.

Fortunately, a vaccine against Group B Streptococcus has been developed and is currently in clinical trials. According to Sarah “This vaccine has the potential to prevent both early and late onset infection and would be a feasible and accessible method of prevention in resource limited settings”.

Despite the benefits, vaccination programmes during pregnancy are affected by a number of factors and uptake rates can often be low. “Unfortunately, simply making the GBS vaccine available will not impact this disease unless there is successful uptake of the vaccine. Experience with vaccines in pregnancy this far has clearly shown that there are problems throughout the world with achieving adequate uptake” said Sarah.

In her PhD project, Sarah is investigating what factors would affect the future uptake of the Group B Streptococcus vaccine.

“Between now and the time that the GBS vaccine will be approved by governing bodies, there is an opportunity to learn more about the perspectives of mothers and providers from different parts of the world.” explains Sarah.

Sarah wants to identify potential issues that would hinder uptake. As Sarah explains “we aim to study the acceptability of this vaccine in the population in advance of its introduction so that public health messaging can be targeted appropriately and well informed from the outset”.

The participation of 3 cross cultural countries was important as it will allow Sarah to understand how current Group B Streptococcus prevention strategies will influence vaccine uptake. “To understand how current practices in GBS prevention may affect vaccine acceptance, we chose to conduct the study in two high income countries that adopt different GBS prevention strategies and a low- and middle-income country where screening is not done” explains Sarah.

Sarah is also conducting interviews with healthcare providers in the 3 countries to get their perspectives on vaccination programmes during pregnancy.

Sarah’s results also suggest that pregnant women have more favourable attitudes towards vaccines that protect their baby than vaccines that protect themselves. The safety of the vaccine was also raised as a concern in all three countries. “Clear information about safety, and a messaging that emphasizes the positive benefits on their infants will be important” stated Sarah.

Access to vaccines was a major issue raised during the study. “It is crucial that each country identifies their under- vaccinated populations now and works to improve access to and acceptability of existing vaccines in these groups in advance of adding new vaccines to the schedule” said Sarah

Ultimately, it is hoped that insights gained from this study will inform Group B Streptococcus vaccine implementation practices that will optimize immediate and consistent uptake of the vaccine.

Further information on Sarah’s research can be found through the following link: