Our August Researcher in Focus is Dr Roger Preston, lecturer in Vascular Biology and principal investigator in the Irish Centre for Vascular Biology at the Royal College of Surgeons in Ireland. Along with his co-investigators, Prof. Séamus Hussey and Dr Patrick Walsh, Roger is funded through the National Children’s Research Centre’s Paediatric Research Project Grant scheme for the project “Engineered recombinant activated protein C as a novel therapeutic agent for children with inflammatory bowel disease”. 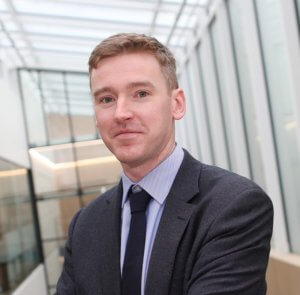 Paediatric inflammatory bowel disease (PIBD) is characterised by the development of chronic inflammation within the gastrointestinal tract of children. It is associated with symptoms such as abdominal pain, bloody diarrhoea, and weight loss and is caused by a complex combination of genetic and environmental factors.

The incidence of PIBD is on the rise in Ireland. As Roger explains “The number of children with paediatric inflammatory bowel disease (PIBD) in Ireland has surged in the last 15 years, such that approximately 20-30% of all patients with IBD now present with symptoms when they are younger than 20 years old. IBD in children causes bloody diarrhoea, stomach pain and weight loss. Furthermore, children with IBD are exposed to enhanced risk of stress, developmental delays and growth impairment”.

The treatment options for children with PIBD are extremely limited and there is a need for new therapeutic strategies that can improve long term outcomes. “Current treatments for children with IBD are often ineffective and can have long-term side effects. Consequently, new approaches that expand the repertoire of efficacious treatments for PIBD are required. This is particularly important in children, as it is postulated that correcting disease early in life may prevent the development of chronic IBD in adulthood”.

Children with PIBD show changes in blood coagulation (also referred to as blood clotting) proteins that may contribute to increased inflammation in the gastrointestinal tract. “Research has shown that patients with IBD show changes in their coagulation. Children with IBD undergo changes in their blood that result in increased levels of blood clotting and pro-inflammatory proteins. The elevated levels of these proteins may contribute to disease severity”.

Stopping the changes in coagulation that drive inflammation in the gastrointestinal tract may provide a novel treatment strategy for PIBD. To this end, Roger is investigating the role the anticoagulant protein C pathway plays in the development of PIBD. Protein C is a blood protein that when converted to its active form, Activated Protein C (APC), plays a critical role regulating both blood coagulation and inflammation. Previous research has shown that the protein C pathway is altered in the intestinal microvasculature of adults with IBD, but it’s not clear if similar changes in the protein C pathway are seen in children with PIBD. “In adult IBD patients, these changes may occur because the proteins that help make APC, which acts as a ‘brake’ for both coagulation and inflammation, are lower than in healthy individuals. It is currently unknown whether defects in the biochemical pathways that enable APC to function normally are also present in children with IBD”.

Roger and his research team are assessing whether the expression of coagulation factors involved in the protein C pathway are altered in the gastrointestinal tract of children with PIBD “In this study, we are assessing whether children with IBD attending OLCHC for treatment exhibit impaired PC pathway activity in their intestinal lining compared to healthy children. This is important, as the correct working of these proteins in the intestine is associated with improved gut health and reduced disease severity”.

If they identify changes in the protein C pathway activity in the intestine of children with PIBD, Roger and his team will use mouse models to assess if administration of Activated Protein C can be used to treat PIBD. “Replacing missing APC in children with IBD may represent a potential new therapeutic strategy for children with IBD, and exciting pre-clinical experiments confirm that APC administration can effectively reduce disease symptoms. However, before APC can be used as an IBD treatment, further studies are required to understand how it works and whether it is possible to optimise its therapeutic efficacy. To achieve this, we have made synthetic versions of APC that will enable us to understand how APC reduces IBD symptoms, then based on these findings, design new versions of APC with improved therapeutic activity that could ultimately be utilised for the treatment of children with IBD, if shown to be effective”.

This project could potentially lead to the development of new treatment options for PIBD. “Collectively, these studies will shed new light on the role of the PC pathway in regulating IBD development in children and facilitate the creation of new therapeutic options to alleviate the growing burden of PIBD in Ireland and other developed countries”.

Additional information about Roger’s research can be found through the following links: