Our Researcher in Focus for June is Dr. Patrick Walsh, a lecturer and principal investigator in the School of Medicine at Trinity College Dublin. His research group is based at the National Children’s Research Centre. Along with his co-investigators, Dr. Andrew Hogan and Prof. Declan Cody, Pat is funded through the NCRC’s Paediatric Research Project Grant scheme for his project “Identifying the role of IL-36 cytokines in the pathogenesis of paediatric obesity”. 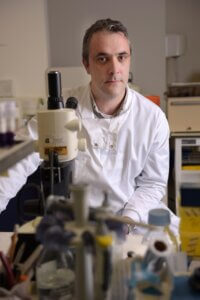 Childhood obesity is a major health concern worldwide. As Pat explains “According to the World Health Organisation, global levels of obesity have more than doubled since 1980. In 2014, more than 1.9 billion adults over the age of 18 were overweight, and of these over 600 million were obese. This represents approximately 40% of all adults being overweight and 13% classified as obese. Perhaps even more startling are figures showing 41 million children under the age of 5 were overweight or obese in 2014 and that for the first time in history, global mortality linked to overweight/obesity is greater than underweight/malnutrition”.

This growing rate of childhood obesity will likely have long term negative health impacts. “A high percentage of children with obesity carry their adiposity into adulthood increasing their predisposition to the metabolic syndrome and severe co morbidities including coronary heart disease, stroke, type 2 diabetes, and certain forms of cancer. In the face of such statistics the childhood obesity epidemic represents one of the most significant current global health challenges” says Pat.

To respond to this global health challenge, we need to better understand the factors that contribute to weight gain and obesity and develop new treatment strategies. “There is pressing need to greater understand how obesity impacts children’s health, and in particular to identify strategies which can be exploited to therapeutically intervene and successfully treat this disease” explains Pat.

There is a growing body of evidence showing that inflammation plays an important role in driving obesity and as such, reducing chronic inflammation may be a potential treatment strategy.  “Alongside the emergence of this pandemic has been an increase in understanding the mechanisms which link the obese state to the development of disease, for the most part in adults. Central to these mechanisms is the heightened state of systemic inflammation [inflammation within the blood circulation] as a result of obesity. Further complexity is added through the instructive role of the gastrointestinal immune system in influencing the pathogenesis of obesity”.

Studies also show that the intestinal microbiome (the population of bacteria within the gut) plays an important role. “[The gut microbiome] is acknowledged as exerting a profound influence over the development of adiposity and metabolic dysfunction. While certain components of the microbiota can exacerbate disease, it is also evident that specific strains of commensal bacteria can regulate adiposity and promote a metabolically healthy state”.

As Pat states “the identification of pathways which regulate intestinal microbiota composition, particularly during the early phases of disease onset during childhood, offer significant potential in efforts to develop novel methods of therapeutic intervention”.

In his NCRC funded research project, Pat and postdoctoral researcher Dr. Eirini Giannoudaki are expanding on these adult focussed studies and trying to uncover how IL-36 cytokines control the development of obesity and metabolic dysfunction in children. Pat explains further “As the analysis of clinical samples from adult patients is confounded by several factors, such as prolonged exposure to environmental factors and therapeutic strategies which impact disease relevant processes, we propose to extend the focus of this analysis into a paediatric obese patient cohort in order to determine whether IL-36 cytokines play a role during the earliest phases of disease”.

By improving our knowledge of IL-36 cytokine signalling pathways in the earliest phase of disease development, Pat and his research team may be able to design novel treatment strategies for obesity “The identification of specific pathological markers and mechanisms of disease during the earliest stages of disease onset, and in patients that are treatment naive, is likely to represent a better approach to understand disease pathogenesis and inform efforts to treat early onset obesity and offset the chances of disease progression into adulthood”.

Further information on Pat’s research can be found here: