Our Researcher in Focus for March is Dr Matthew McGovern. Matthew was a National Children’s Research Centre funded Clinical Research Fellow based in the Trinity Translational Medicine Institute at St James’ Hospital. Under the supervision of Prof. Eleanor Molloy, Matthew undertook a PhD working on the GENIE study: GEnder and Neonatal Inflammation in prEterm outcomes. 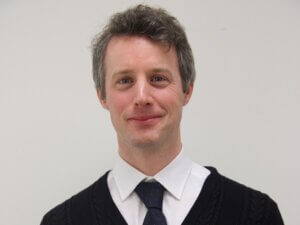 Previous research has shown that male babies are at increased risk of sepsis.  “Male premature babies tend to be affected by sepsis more frequently than females and it is thought that they are at higher risk of complications following the onset of sepsis” said Matthew.

The exact reasons for the increased risk in male premature babies are not known. “At the moment, we do not fully understand the reasons for this but it has been suggested that a combination of genetics, hormones (chemical messengers within the body) and immunological differences exist between boys and girls that combine to cause the differences that we see at the bedside” explained Matthew.

In the GENIE study, Matthew set out to investigate the reason behind the increased risk of neonatal sepsis seen in male preterm babies by comparing health outcomes and immune responses in male and female preterm babies.  “In this study, we were aiming to better understand the role of sex in the immune system, infection susceptibility and clinical outcome among premature babies”.

Preterm and term infants were recruited across the three Dublin maternity hospitals; the National Maternity Hospital Holles Street, the Rotunda Hospital, and the Coombe Women and Infants University Hospital. Detailed assessments of preterm infants were performed, and blood samples were collected. “We were evaluating the frequency and severity of infections in premature babies as well as making objective measurements of how sick affected males and females were. We were also using laboratory techniques to measure how active the immune cells in the blood of premature babies were” explained Matthew.

Consistent with previous research, Matthew found that male preterm babies had poorer health outcomes. He explains “We measured ill-health in babies enrolled in this study using scoring systems called organ-dysfunction scores. These scores use clinical signs and routine laboratory data to provide an objective measure of how unwell a child is. We also measured the frequency of sepsis episodes in premature babies and the severity of these episodes using organ-dysfunction scores. This data was then compared between males and females to see if males were more frequently and severely affected by sepsis among our patient group. We found that premature baby boys tended to require more support immediately after birth and this was especially so with regard to breathing support at birth and the need for mechanical ventilation early in life. Boys also tended to be sicker during episodes of sepsis as represented by higher scores on the organ dysfunction measurements collected. Lastly, premature baby boys tended to have poorer clinical outcomes overall compared to girls of similar maturity as represented by a greater need for long-term breathing support and higher incidence of brain abnormalities. These findings are supported by existing clinical studies and suggest that sex is an important variable to consider in both designing research and in clinical practice”.

When immune cell or white blood cell responses and blood biomarkers of inflammation were measured, Matthew found that male premature babies displayed less robust immune responses. “We found that baby girls showed greater immune cell activity in many scenarios suggesting that they are better prepared to prevent and fight bacterial infection than boys. We also found that immune messengers called cytokines were found at greater levels in girls following laboratory stimulation. We found this for cytokines involved in both starting and stopping inflammation, suggesting that girls are better at fighting infection and preventing the damage that may result from activation of the immune system. These findings help explain the profound susceptibility of premature baby boys to infection and infection-related complications”.

Matthew also evaluated the role genetic and hormonal factors have on immune function in preterm infants. Preliminary studies suggested that the presence of an additional X chromosome was not a contributing factor to altered immune responses seen in males and female infants “The limited genetic studies that we undertook did not suggest any role of the X chromosome in helping to protect baby girls though further work is needed in this area”.

However, female sex hormones were shown to affect immune responses. Matthew explains further “Estrogen and progesterone are the most important female hormones and it has been suggested that they may have a role in adjusting the immune response of girls. We found that [the addition of] these hormones [to blood samples in the lab] generally dampened the immune response in both babies born prematurely and term babies…..and is likely an important contributor to the ability of baby girls to regulate the damage caused by excessive inflammation”.

To build of the exciting results of the GENIE study, Matthew has a number of follow up studies planned. “We are hoping to study hormone levels in blood and urine of babies to determine the levels of commonly encountered hormones in this population. We are doing this as there is very limited research in this area among premature babies and we believe that hormone levels may be a source of the improved immune cell response we have observed of girls. We are also hoping to evaluate the development of the babies who participated in this study as they get older. We are undertaking this as we wish to relate the laboratory findings that we have to later well-being to see whether, in addition to the direct effect on infection defence, these measurements may predict later developmental outcome in former premature boys and girls”.

More information on Matthew’s work can be found through the following links: