Our Researcher in Focus for April is Dr Claire Murphy. Claire is a NCRC funded Clinical Research Fellow based in the Royal College of Surgeons in Ireland and the Conway Institute, University College Dublin. Under the supervision of Prof. Naomi McCallion and Prof. Patricia Maguire and in collaboration with Prof. Fionnuala Ní Áinle, Prof. Afif EL-Khuffash and Dr Elaine Neary, Claire is working on the EVENT (Extracellular Vesicles in Early preterm Neonates and Thrombin generation) study. 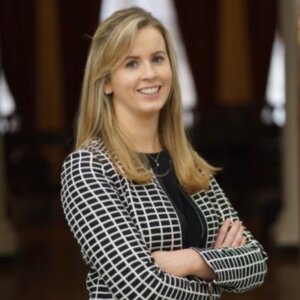 Babies born prematurely are at high risk of developing serious life-threatening complications, including excessive bleeding. As Claire explains “Worldwide, prematurity is the leading cause of death in the first month of life. In Ireland, over 600 infants are delivered weighing under 1500g each year. These infants require intensive care support to survive. Infants born very early can experience serious problems due to bleeding and inflammation. These problems can affect many of their organs and cause long-term difficulties. For example, preterm babies have a high risk of having a bleed in their brain. This happens to one in five babies born less than 1500g and up to half of the extremely small babies weighing less than 750g”.

The exact reasons why preterm infants are at increased risk of bleeding are poorly understood. “Preterm infants are thought to be at high risk of bleeding due to poorly functioning clotting cells (called platelets) and lower levels of circulating blood clotting proteins” said Claire.  Previous research by Clinical Research Fellow Dr. Elaine Neary (supervised by Prof. McCallion and Prof. Ní Áinle) showed that there is no difference in blood clotting between term and preterm babies when thrombin generation (a critical protein in blood clotting) is measured in plasma. Claire explains further  “Our group has shown that when blood from premature infants is tested after platelets and red blood cells have been removed, the ability of their plasma to clot seems to be similar to babies born at term, when measured using a real time blood clot formation test”.

Following on from the work of Dr. Neary, Claire is studying platelet dependent blood clotting. Platelets are small blood cells that play a critical role in preventing excessive bleeding by sealing the site of damage within a blood vessel and by providing a negatively charged surface for thrombin generation. By studying platelet dependent blood clotting, Claire will get a more accurate measure of how the blood of term and preterm infants clots. “Because platelets play a critically important role in blood clotting, it is incredibly important to know whether blood clotting using this same technology [as Dr Elaine Neary] will be similar when platelets are included. This would be closer to what takes place when blood clots form in real life” said Claire.

Claire is also interested in blood extracellular vesicles (EVs).  EVs are small subcellular particles released by all cells. They can be found in high concentrations in biological fluids such as blood. Previous studies in adult populations have shown that EVs play a role in physiological processes such blood clotting (similar to platelets, they can provide a surface for thrombin generation), but increased levels are also associated with a number of chronic pro-inflammatory conditions. “Cells also make tiny particles called extracellular vesicles (EVs) that can carry out some functions of that cell and play a number of very important roles including altering inflammation. In adults, it has been shown that EVs can play a role in causing disease but have also been used to diagnose certain illnesses and as a target for drug treatments” said Claire.

In contrast to adult populations, there is limited information on EVs in term or preterm newborns. “We don’t understand how EV profiles differ in premature babies” said Claire. However, pilot study data from the Conway SPHERE Group (led by Prof. Maguire and Prof Ní Áinle) suggested that preterm babies have unique EV profiles compared to term babies; “We have looked at a small group of premature babies and have shown that their EVs differ compared with older babies, but do not yet know what the impact or clinical relevance of these EV differences is”. Claire aims to build on this preliminary data by studying EVs in a larger group of term and preterm babies.

To study blood clotting and EVs in newborns, Claire is recruiting term and preterm infants at the Rotunda Hospital and Coombe Women & Infants University Hospital. “Parents of infants born at less than 31 weeks gestation will be invited to allow their babies to join our study. With parents’ permission, blood samples will be taken from the umbilical cord at birth. Much smaller blood samples will be taken from the baby’s arm on day 1, 3 and at two weeks, until 31 weeks’ gestation” explained Claire.

By collecting samples at multiple time points, Claire is able to study changes in blood clotting and EVs during the postnatal adaptation period. This is the critical period following birth when newborns must undergo a series of physiological changes (e.g. clearance of lung fluids and the initiation of breathing) to adapt to life outside the womb. During this period, they are at greatest risk of developing serious complications such as bleeding. Parameters that could predict the onset of complications in preterm babies would aid patient care and greatly improve survival rates in this high-risk group.

To look at the association between blood clotting, EVs, and clinical outcomes, detailed analysis will be performed on newborns recruited to the study. “Background and clinical information will be recorded, and standard brain scans will be performed. “We are collecting the clinical outcomes of these preterm infants and at the end of the study, we will compare the results of our scientific tests to these outcomes in order to identify potential markers of disease” said Claire. Patient recruitment to the EVENT study is ongoing with results expected in 2022.

More information on Claire’s research can be found through the following links;