Our February Researcher in Focus is Dr Brona Murphy. Brona is a senior lecturer and Principal Investigator within the Department of Physiology & Medical Physics at the Royal College of Surgeons in Ireland. She is funded through the National Children’s Research Centre’s Paediatric Research Project Grant scheme to work on her project “Improving and personalising chemotherapy treatment options for paediatric brain tumour patients”. 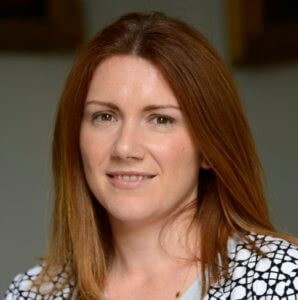 It is an extremely fast-growing cancer that can spread to other parts of the central nervous system through the cerebrospinal fluid. Due to this, children with medulloblastoma are treated aggressively using a combination of surgery (to remove as much of the primary tumour as possible), radiotherapy, and/or chemotherapy.

This multi-pronged approach to treatment has transformed medulloblastoma from a virtually incurable disease to a more manageable condition where 70% of children survive over 5 years and 58% for more than 15 years.

However, this aggressive treatment strategy is associated with severe side effects and a significant risk of radiation-induced brain injury. As Brona explains “While survival rates have improved, many children are left with long-term disability because the treatment also affects their still-developing brain. Survivors experience developmental delays and fertility issues due to hormone imbalances, poor mobility, delayed speech, poorer cognition, and tend not to do as well as their peers in school”.

This highlights an urgent need for a more personalised approach to treating medulloblastoma, one which could select the most appropriate drug for each patient in order to reduce or eliminate the need for radiotherapy and reduce the side effects associated with ineffective therapy.

This is the unmet need that Brona’s research hopes to address, she states: “I am specifically interested in brain tumours that occur in children as such malignancies result in a tremendous loss of quality-adjusted-life-years due to the disabling consequences of treatment. This has a profound effect on the children themselves and their families. We aim to develop ways to predict how individual patients will respond to both currently available and new drugs, so that the most suitable treatment can be given to each patient.  This would spare patients the toxic side effects of treatments that hold no benefit for them. In particular, the use of radiation therapy could be decreased or eliminated for some groups of patients, which would significantly reduce the side effects they will experience”.

To do this, Brona’s research group are testing the effect of a wide range of chemotherapy drugs, alone and in combination, on different medulloblastoma cells lines in the lab. On the same cell lines, they measure the levels of various intracellular proteins that have been shown to control how cells respond to chemotherapy drugs.  As Brona describes “All cells, including cancer cells, contain a number of different proteins that regulate how cells respond to chemotherapy. The individual amounts of these proteins can vary from person to person”. These include proteins such as caspases and Bcl-2 family members that are involved in apoptosis, a process of controlled cell death that is critical for the normal development and stability of human tissues but is dysregulated in tumours.

The team then use computer programs to model how changes in the levels of proteins in different medulloblastoma cell lines influence the effectiveness of chemotherapy drugs “By analysing these proteins and then using computer programs to examine how these proteins interact with one another and the downstream consequences of such interactions, we hope to develop a system that can predict which chemotherapy drug will work best for an individual patient”

If this approach could be applied to each individual’s tumour, it could have significant benefits for children with medulloblastoma “The outcomes of my team’s research have the potential to impact the lives of these children and their extended families, by personalising their care during treatment and improving their quality of life after treatment”.

Further information on Brona’s research can be found through the following links: