Our March Researcher in Focus is Dr Andy Hogan. Andy is Assistant Professor in Immunology & Principle Investigator with the Obesity Immunology Research Group at Maynooth University. He is funded (along with Prof. Donal O’Shea, St Vincent’s University Hospital) through the  National Children’s Research Centre Paediatric Research Project Grant scheme to work on the project “Investigating the immune system in childhood obesity”. 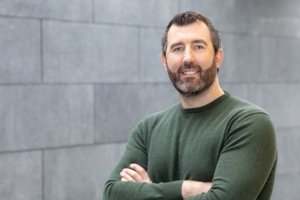 Obesity is associated with a state of chronic inflammation and there is a well-established link between chronic inflammation, changes in the immune system, and the development of disease in adulthood “Children who are living with obesity are at a greater risk of developing diseases such as type II diabetes and cancer later in life”.

Andy’s research group are investigating how childhood obesity causes changes in the immune system, by comparing immune cell responses in children who are lean, overweight, or obese “Our group brings together a team of scientists, paediatricians, and adult endocrinologists to tackle the problem. Using state of the art immunology techniques, we are identifying changes in the immune system caused by obesity. We are very interested in specific types of immune cells, including Natural Killer or NK cells(immune cells  that play an important role in recognising and killing virus-infected cells or tumour cells) & Mucosal associated invariant T  or MAIT cells(immune cells that play an important role during bacterial and viral infections), which we think may play a role in the development of diseases later in life. We are investigating exactly how changes in these cells contribute to the development of co-morbid diseases, for example, the development of insulin resistance, the precursor to type II diabetes”.

They are particularly interested in how NK and MAIT cells use their energy stores when eliciting an immune response “To date we have found out how obesity causes changes in both NK cells and MAIT cells, essentially these cells need energy & a working “engine” to perform their duties, we have found that in patients with obesity, the engine of these cells is damaged and sometimes is running on the wrong fuel”.

By understanding exactly how obesity causes these changes in immune cell function, Andy’s research group hope to be able to develop new therapies and new strategies to stop the development of obesity related diseases such as type II diabetes and cancer. “We are now investigating if medications which are currently used in adults might reverse this damage, potentially halting the march towards chronic disease later in life”.

This childhood obesity research develops on Andy’s research on obesity in adults “Having worked in the area of adult obesity for over 10 years, I had seen the impact it has on people’s lives and health. We gathered evidence which told us that changes in the immune system underpinned many if not all the chronic diseases associated with obesity. Once evidence emerged that the development of these disease can start very early in childhood, we wanted to see if we could figure out how to stop their development”

This research is having an impact at both a national and international level “To date, 100% of our childhood obesity work has been funded by the NCRC/CMRF. The results from our work has been extensively used by our co-PI Professor Donal O’Shea (HSE National Lead for Obesity) in educating policy makers (from national to EU through to the WHO) on the impact of living with obesity, leading to important changes on how we view & tackle obesity”.

Additional information on Andy’s research can be found through the following links: