Dr. Cilian Ó Maoldomhnaigh is a National Children’s Research Centre funded Clinical Research Fellow based in the Trinity Translational Medicine Institute at Trinity College Dublin, working under the supervision of Prof. Joseph Keane and Dr. Patrick Gavin. He is funded through the NCRC for his project “Paediatric macrophage metabolism during mycobacterial infection”. 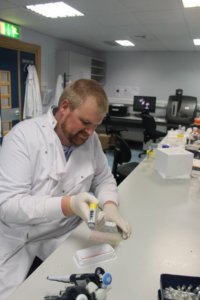 Tuberculosis (TB), caused by the bacteria Mycobacterium tuberculosis (MTB), is a leading cause of child death worldwide. Every year, at least one million children will be diagnosed with TB, and of those infected, over a quarter of a million children will die. The biggest risk of developing TB is within the neonatal period with newborn babies having a 5-10-fold increased risk compared to adults. As Cillian explains “The time of life when you are most vulnerable to infection following exposure to the bug is the neonatal period. Not only is the risk of contracting the disease 5 to 10-fold higher than in adulthood but the chances of the disease spreading, for example causing meningitis, is much greater”.

Cilian is investigating the reasons behind this increased risk of TB seen in newborn babies. Previous research indicates increased susceptibility in newborn babies is due in part to their poor or “immature” immune response to infectious agents. Cilian explains “This research was undertaken because there is a gap in knowledge about why babies are more prone to TB infection. While there has been much research performed over many decades examining the differences in the immune response in babies compared to adults, that research has not focused on TB”.

Cilian is particularly interested in macrophages, an immune cell that is important in fighting a TB infection. Macrophages work by digesting bacteria that they encounter. The ability to do this is determined by the way that they use different energy pathways. “In the past decade there has been growing interest in the way that cells use energy (metabolism) and how this effects the way that the immune system responds when it encounters an infection. Research in our laboratory previously has shown the importance of this change in cell metabolism after adult immune cells are infected with TB”.

In Cilian’s research, he is assessing whether the “immature” immune response in newborns is due to how their macrophages generate energy. “This field of immunometabolism (examining how a cell uses energy to generate and change its immune response) is only recently being explored in babies and there is no published work on how TB infection affects metabolism in this age group”. Cilian collects cord blood samples from newborn babies and peripheral blood samples from adults. He isolates macrophages from these samples and then exposes these macrophages to the bacteria that causes TB, and compares how newborn baby and adult derived macrophages use their metabolism as they attack the bacteria.

His preliminary work suggests that newborn and adult macrophages differ in how they use their energy stores as they attack the bacteria. Following confirmation of these results, Cilian will try to fine-tune the newborn’s macrophage responses by changing how their macrophages generate energy in order to help them destroy the TB bacteria more effectively.

Knowledge gained from Cillian’s work could lead to improved treatments for TB. The standard treatments for TB are over 50 years old and cases of multi-drug resistant TB are becomingly increasingly common. There is a major need for new and effective treatment strategies for TB that can counter this growing threat. As Cilian states “Treatment for TB requires multiple drugs over many months which means that people often don’t finish the course of antibiotics. Strains of the bug that are resistant to multiple different drugs have also emerged in recent years with an estimated 40,000 children infected with these strains in 2018. In order to meet the targets of the End TB 2035 World Health Organisation campaign, new drugs that boost the immune response following TB infection and a better vaccine to prevent infection need to be developed”