Getting under the skin of eczema

Research funded by the NCRC has identified why eczema often affects the cheek first, explained how this may lead to the development of food allergy, and highlighted the importance of the use of appropriate moisturisers early in life. Non-invasive markers of disease severity were also identified during this research.

Eczema is the most common inflammatory disease of childhood, affecting as many as 1 in 5 children in Ireland and the UK. It is also a disease of early life: 45% of cases occur within the first 6 months of life; 60% in the first year; and 85% in the first 5 years. Eczema has an enormous impact on the quality of life of children and their families, and is also frequently associated with other conditions such as food allergy and asthma.

The skin acts as a very effective barrier, but in eczema this barrier is faulty, leading to skin inflammation, irritation, immune abnormality, and frequent skin infections. Professor Alan Irvine, a Consultant Dermatologist at CHI at Crumlin, is the lead on this study. Together with his colleague, Professor Irwin McLean (University of Dundee), he discovered the strongest genetic risk factor for eczema identified to date – a genetic mutation coding for Filaggrin, a protein important in the structure of the skin. This was a major breakthrough, which helped to explain some, though not all, of the skin barrier defects found in this disease. Many questions, however, remained unanswered and this project was designed to address these. Why does eczema begin so early in life, and why is the cheek often the first site affected? Why does the disease persist in some children and resolves in other? What factors influence disease severity and the development of food allergy and asthma in some, but not all, children, and can this be predicted? 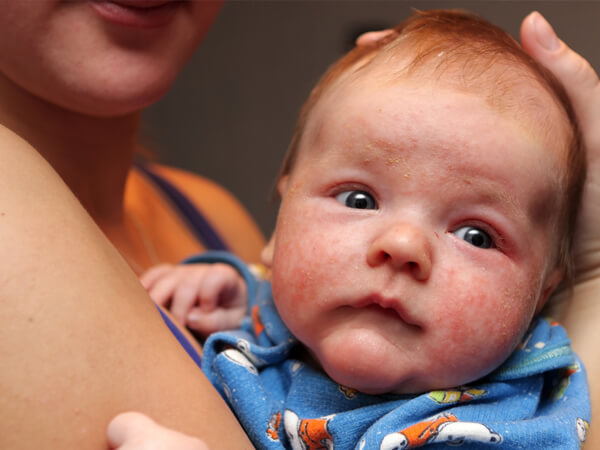 Over the course of her PhD project, Dr Maeve McAleer, working with Professor Irvine, made a number of important discoveries. They showed that Filaggrin protein breakdown causes a change in the shape of key cells within the skin of children with eczema, essentially changing the structure of the skin, and damaging its barrier function. This helps to explain why children with filaggrin mutations have persistent disease and are at a higher risk of food allergy and asthma.

They also discovered why the cheek is often the first place that eczema develops in early life. Their research showed that it takes longer for the cheek to develop sufficient amounts of its own natural moisturising factor than other parts of the body, and that this makes it especially vulnerable to disease. It also allows common food allergens to enter through the immature and vulnerable cheek skin in susceptible children, where it may trigger the development of life long allergies. This exciting finding suggests that the skin, rather than the mouth, may be the portal for developing food allergy. It also highlights the importance of using appropriate moisturisers doing the early postnatal weeks to protect the skin – particularly of the cheek.

In the final phase of their work, they found immunological biomarkers – biological substances used as indicators of disease state – that correlate well with disease activity. They measured biomarkers in the plasma, from a blood test, and they also developed a very useful, non-invasive, and painless test using surface skin cells. These biomarkers can help to predict the disease severity, allowing early intervention.

< Premature babies: not too hot, not too cold