Dr. Charlene Foley: Understanding the arthritis that affects children with Down Syndrome

Children with Down syndrome (a genetic disorder caused by the presence of an extra chromosome 21) are at increased risk of developing arthritis. The early diagnosis and treatment of arthritis in children is critical for long-term joint health and normal growth. However, the diagnosis of arthritis in children with Down syndrome (termed Down syndrome-associated Arthrits or DA) is extremely challenging (see Figure 1). As a result, it is rarely recognised at onset, and has been under-diagnosed in the past. 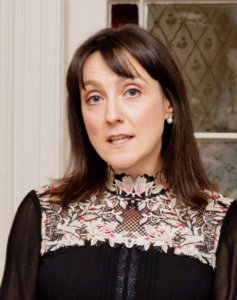 In a ground-breaking study supported by the National Children’s Research Centre, Down Syndrome Ireland and Arthritis Ireland, Clinical Research Fellow, Dr. Charlene Foley (under the supervision of Dr. Orla Killeen, Professor Ursula Fearon and Professor Gerry Wilson) established national musculoskeletal screening clinics to identify undiagnosed cases of DA, establish whether DA was being missed and describe the clinical phenotype. After an awareness campaign was launched, children with Down syndrome were invited to attend an assessment clinic where a full medical history was taken, and a musculoskeletal examination was performed. Children with evidence of joint problems were followed up at the National Centre for Paediatric Rheumatology (Children’s Health Ireland at Crumlin) where a more detailed assessment was performed by a consultant paediatric rheumatologist and a diagnosis of arthritis was confirmed.

Charlene’s study found that the prevalence of DA was 1 in 50. This is 20 times higher than the prevalence of arthritis in children without Down Syndrome, known as juvenile idiopathic arthritis (JIA). In many cases, the diagnosis of DA was delayed and there was increased evidence of joint erosion, indicating irreversible joint damage. Charlene’s study also found that children with DA had distinct clinical features. The small joints of the hand and wrist are more often affected in DA than JIA. 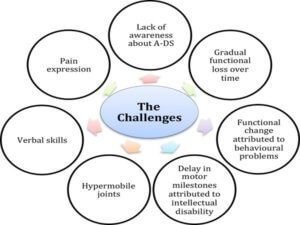 Figure 1: Factors that influence the diagnosis of DA (from top, clockwise). (a) There is a lack of awareness of the increased risk of arthritis in Down Syndrome among the general population and healthcare professionals. (b) Gradual rather than acute functional loss may go undetected by the child’s carer. (c) Frequently, delay in motor development is falsely attributed to intellectual disability, and changes in activities of daily living to behavioural problems associated with Down syndrome, rather than a possible diagnosis of arthritis. (d) Hypermobility, a feature of Down syndrome may make musculoskeletal examination more challenging, as it may be difficult to appreciate loss of range of movement secondary to an inflammatory arthritis. (e) Many children may be uncooperative when it comes to examination. This combined with poor verbal skills can make eliciting a clear history and thorough musculoskeletal examination challenging. (f) Apparent differences in pain expression have been reported in children with Down syndrome. Children with Down syndrome often adapt to pain with reported observations such as slowing mobility, reluctance to hold a parental hand, or behavioural change.

To date, Charlene’s research has increased knowledge and awareness about DA amongst the general public and within health care domains. This has improved recognition of the disease, undoubtedly leading to more timely diagnosis and treatment of DA, and therefore improved clinical outcomes. The NCRC is continuing our support of research into DA. Through the Paediatric Research Project Grant scheme, Prof. Ursula Fearon and Dr. Orla Killeen are further investigating what factors contribute to inflammation in children with DA.

Figure 2: Down Syndrome and Arthritis. An information video produced by Dr. Emma Dorris (UCD Centre for Arthritis Research) and Amirah Alzaki (School of Biomolecular and Biomedical Science Student Summer Research Award ) aimed at creating greater awareness of the symptoms of DA within the general public and healthcare professionals.

More information on Charlene’s work can be found through the following links:

Foley C, Killeen OG. Musculoskeletal anomalies in children with Down syndrome: an observational study. Archives of Disease in Childhood 2019;104:482-487. (Pubmed)