Understanding the role of extracellular vesicles in newborn physiology and pathology

Dr. Claire Murphy is funded through the NCRC’s Clinical Research Fellowship scheme to undertake a MD under the supervision of Prof. Naomi McCallion (Rotunda Hospital/Royal College of Surgeons in Ireland) and Prof. Patricia Maguire (University College Dublin). Claire is studying changes in blood clotting and blood cell derived extracellular vesicles that occur in premature and term infants in the period immediately following birth. Her research aims to improve our understanding of the physiological changes that occur in newborns and identify factors that may contribute to or predict the onset of illnesses in premature infants.

Claire recently published a review article entitled “A review of the role of extracellular vesicles in neonatal physiology and pathology” in the journal “Paediatric Research” (Pubmed). Read Claire’s plain English summary of the review article below.

Newborn infants can occasionally become very sick, particularly those born too early (premature). Very premature babies have immature organs and are at high risk of bleeding, particularly into the brain which can cause long term disability. Preterm infants are thought to be at high risk of bleeding due to poorly functioning clotting cells (called platelets) and lower levels of circulating blood clotting proteins. 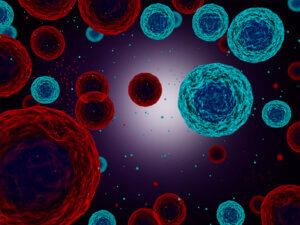 Cells also make tiny particles called extracellular vesicles (EVs) that can carry out some functions of that cell and play a number of very important roles including altering inflammation. In adults, it has been shown that EVs can play a role in causing disease but have also been used to diagnose certain illnesses and as a target for drug treatments.

In this review, we have described what is currently known about the role of EVs in newborn babies. We identified 26 studies, published over the last twenty years. Several of these, studied the role of EVs in neonatal blood clotting. Many showed that babies had a larger number or greater activity of “clotting” EVs than adults. It may be that having more EVs could be a way for babies to compensate for their less active clotting systems.

A number of studies described EVs as markers of certain neonatal diseases. Two “biomarkers” of chronic lung disease, a serious complication affecting the lungs of very preterm babies, were identified. Similarly, markers predicting poor outcomes after newborn brain injury have been described. In the future, these biomarkers may allow doctors to identify babies at high risk of a particular problem, and to tailor their treatment accordingly.

This review also identified future areas for neonatal EV studies, particularly the use of robust techniques to describe subtypes of EVs and relate those EV findings to what problems individual babies get, and to how severely those problems affect them in both the short and long term.

Understanding the effect of childhood obesity on vaccination responses >