Professor Alan Irvine, a Consultant Dermatologist in Our Lady’s Children’s Hospital and Associate Professor of Dermatology in Trinity College Dublin, has been awarded the prestigious Marion B. Sulzberger, MD, Memorial Award and Lectureship for his work on eczema.

The Memorial Award and Lectureship is awarded to researchers that have made significant contributions to the understanding of clinical medicine via their basic research. Professor Irvine is only the second non-US based clinician-scientist to win the award. 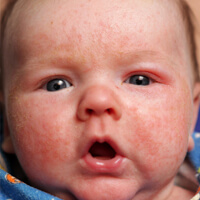 Professor Irvine, an NCRC supported researcher, investigates the disease processes that lead to eczema (atopic dermatitis), the most common skin disease of children in the developed world. He primarily focuses on three aspects of the disease – genetic risk, the impact of infection with the bacteria Staphylococcus aureus, and the role of the immune system. In a breakthrough recognised worldwide, Professor Irvine identified mutations in a gene called filaggrin, which is important for skin barrier function, as a key contributing factor to the development of eczema. This research, carried out in collaboration with Professor Irwin McLean (University of Dundee), revolutionised how we think about the disease.

Professor Irvine said: “I’m deeply honoured to have received this award and extremely grateful to everyone who has supported my research.”

Professor Marion Baldur Sulzberger was the Chairman of the New York University-Bellevue Medical Centre, and later a professor of clinical dermatology at the University of California in San Francisco. He was also the founder of the Society for Investigative Dermatology, and president of the American Dermatological Association. The Marion B. Sulzberger, MD, Memorial Award and Lectureship was established by Mr Murray Gruber in 1983. The recipient presents a lecture during the Plenary session at the American Academy of Dermatology’s Annual Meeting.