Dr. Laura MacDarby is funded by the NCRC’s Research Education Support Grant scheme to undertake a MD under the supervision of Prof. Gerald Curley (Royal College of Surgeons in Ireland), Dr. Martina Healy (Children’s Health Ireland, Crumlin), and Dr. John McHugh (Children’s Health Ireland, Crumlin).  Laura’s research is focused on the use of tests that measure electrical activity in the brain to detect brain injuries in children. Laura recently published a paper entitled “EEG in the Paediatric Intensive Care Unit – An Irish Experience” in the “Journal of Clinical Neurophysiology” (Pubmed). Read Laura’s plain English summary of the paper below. 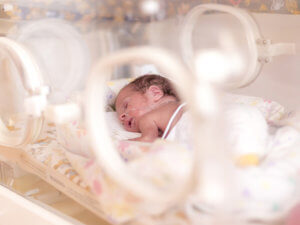 Our brains contain a huge number of nerve cells that communicate with each other by creating and receiving electrical signals. Continuous electroencephalography (cEEG) is a non-invasive test that allows us to monitor electrical activity in the brain. It is the most widely used test to monitor brain activity and detect seizures (sudden, uncontrolled electrical disturbances in the brain) in neonatal and paediatric intensive care units.

For example, cEEG can be used to assess brain activity in newborns suffering from hypoxic-ischemic encephalopathy or HIE. HIE is a type of brain injury (encephalopathy) caused by the interruption of the supply of oxygen (hypoxia) and blood (ischemia) to the newborn’s brain.  In babies with HIE, cEEG can be used to differentiate between newborns with moderate or severe brain injuries and identify the those newborns who would most benefit from treatment with therapeutic hypothermia (a controlled lowering of the body temperature that has been shown to improve outcomes in newborns with HIE).

The evidence supporting the use of cEEG is increasing year on year. However, many hospitals do not have access to cEEG monitoring as cEEG generally describes studies of 3 hours or greater. Therefore, clinical management is often determined in its absence or using studies of shorter duration. Access to EEG is often during office hours only and usually consists of routine EEGs (rEEG) which tend to be approximately one hour in length. In our study, we performed a review of the use of EEG monitoring in the intensive care unit at Children’s Health Ireland, Crumlin. We looked at all children admitted to the intensive care unit who received an EEG, over a 2-and-a-half-year period. Over this period, there were 108 children (57% < 1 year old) who received 196 cEEG scans. This amounted to 434 hours of recording, only 7% of which were greater than 3 hours.

Seizures were detected in 17% of patients. In cases where seizures were detected, 74% of seizures were silent, therefore children did not show any physical signs of a seizure (e.g.) uncontrolled movements. The ability of cEEG monitoring to detect these “silent” seizures is critical as they allow us to identify the children at greatest risk of poorer clinical outcomes. Studies have shown, the longer children are monitored, the greater the change of detecting these seizures.

Within the study population, the use of anti-epileptic drugs (a medication that is used to prevent seizures) was high. We believed this to be related to a high clinical suspicion of seizures by clinicians, who then treated empirically while awaiting the results of cEEG monitoring. There was also a trend towards a reduction in the number of seizures detected and a reduction in the detection of markers of seizure tendency (changes on EEG called epileptiform activity which suggest increase tendency toward seizures), with increasing levels of sedation.

In summary, EEG provides important diagnostic information in a large proportion of patients admitted to a paediatric intensive care unit. Anti-epileptic drug use increases if access to EEG is limited. Minimising sedation prior to EEG monitoring may improve diagnostic accuracy in intensive care patients.

You can find other plain English summaries of NCRC supported research through the following links:

Dr. Dean Huggard: Altered Toll like receptor signalling in children with Down syndrome

Congratulations Dr. Jaythoon Hassan; Winner of the Laboratory Scientist of the Year Award >