Dr. Deirdre Sweetman was funded by the NCRC’s Clinical Research Fellowship scheme to undertake her study “Neonatal brain injury on MRI and early EEG. Association with disruption of the blood brain barrier and systematic antioxidants”. Her supervisor, Prof. Eleanor Molloy (TCD), is currently funded through the NCRC’s Paediatric Research Project Grant scheme to undertake the “GEMINI study: GEnder and inflaMmatIoN In neonatal encephalopathy study”. Deirdre and Eleanor recently published a paper entitled “Coagulation profiles are associated with early clinical outcomes in neonatal encephalopathy” in the journal “Frontiers in Paediatrics” (Pubmed). Read their plain English summary of the paper below. 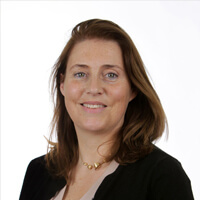 Neonatal encephalopathy is a brain injury (encephalopathy) affecting newborns. It is seen in 2-9 cases per 1000 live births. Neonatal encephalopathy manifests in the form of symptoms such as seizures and changes in consciousness. The most frequent cause is a lack of oxygen during pregnancy or birth, but it can be caused by several factors, including infection and genetic factors.

Neonatal encephalopathy is a life-threatening complication that can lead to problems throughout the body, including in the liver, heart, and blood. For example, newborn babies who have been deprived of oxygen are at a higher risk of developing clots throughout their blood circulation, a condition called disseminated intravascular coagulation. Major changes in the clotting system are common in newborns who have been deprived of oxygen during the perinatal period (the period immediately before and after birth).

In our study, we were asking “Can changes in the clotting system be used to predict which newborns will develop neonatal encephalopathy?”. For the study, we recruited newborns (n = 82) who were deprived of oxygen during the perinatal period. Of these, 39/82 newborns were treated with therapeutic hypothermia. We measured the number of blood platelets (blood cells involved in clot formation), clotting times (time until the clotting protein fibrinogen is converted into fibrin following activation of the clotting system), and fibrinogen levels, at multiple time points during the first week of life. We then looked at the association between these measures of clotting and clinical outcomes in these newborns (e.g.) seizures, bleeding events.

You can find other plain English summaries of NCRC supported research through the following links:

Dr. Dean Huggard: Altered Toll like receptor signalling in children with Down syndrome

< Highlights from the NCRC Annual Symposium 2019