A patent ductus arteriosus is a blood vessel connecting the two major vessels leaving the heart: the aorta and the pulmonary artery. When a baby is in the womb, they get their supply of oxygen from their mother, so blood is not sent to lungs to collect oxygen before being pumped around the body. The PDA works as a lung bypass, sending blood away from the lungs to the rest of the body. In babies born at full term (> 37  weeks gestation), the PDA usually closes in the first few days after delivery. In babies born very prematurely (<29 weeks gestation), the PDA can remain open for a long time. If this occurs, the PDA sends blood towards the lungs and away from the rest of the body (in a way opposite to that in the womb). This can cause the lungs to receive extra fluid and contribute to chronic lung disease (CLD). 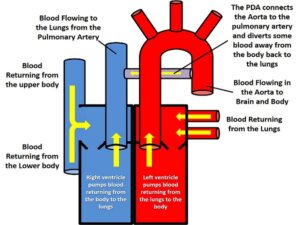 In a newly published study, Prof. Afif EL-Khuffash, Dr Neidin Bussman and colleagues tested the feasibility of recruiting preterm infants to a randomized controlled trial of patent ductus arteriosus (PDA) treatment based on a PDA severity score (PDAsc). Prof. EL-Khuffash’s research group have previously demonstrated that an echocardiography-based PDA severity score (≥ 5.0) derived on day 2 of age can accurately predict the later occurrence of chronic lung disease or death (CLD/Death) in premature infants with PDA. This pilot study aimed to characterize challenges in obtaining consent, compliance with the protocol, and PDA closure rates. At the Rotunda Hospital, Dublin, 60 infants <29 weeks’ gestation with a high PDAsc (≥5.0) at 36–48 hours of age were recruited and randomised to receive either Ibuprofen or Placebo intravenously. The primary outcome of the study was chronic lung disease diagnosed at 36 weeks or death before discharge. Eighty eight percent of approached parents consented for the study. The overall PDA closure rate after treatment was 57% in the Ibuprofen treatment Group and 17% in the Placebo treatment Group (p<0.01) but there was no difference in the primary outcome between the ibuprofen and placebo treatment groups. There was a high rate of adherence with the protocol.

On the results of the study, lead investigator Prof. Afif EL-Khuffash said “In this RCT [randomised controlled trial], we demonstrated that randomising infants based on a severity score is feasible with a high consent rate. We highlighted the relatively poor efficacy of early medical treatment in achieving ductal closure in the intervention arm”.

This research was published in the Journal of Paediatrics. The complete publication can be found through the following link: