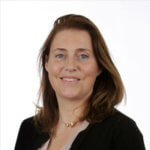 Internationally she has served as the Secretary & President of the Irish American Paediatric Society and as the Irish representative on the European Board of Paediatrics: European Union of Medical Specialists (UEMS), Confederation of European Specialists in Paediatrics (CESP).