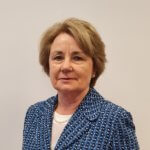 Mary Finlay Geoghegan is a former Judge of the Supreme Court, the Court of Appeal and the High Court and a former ad-hoc judge of the European Court of Human Rights.

Prior to appointment to the High Court in 2002, she was a Senior Counsel in practice at the Irish Bar and called to the Bars of Northern Ireland, England & Wales and New South Wales, Australia.  Prior to call to the Bar in 1980, she was a solicitor and partner of McCann, FitzGerald.

She is a Bencher of The Honorable Society of King’s Inns, Dublin and The Middle Temple, London.  She was chair of the development committee of the Law School of King’s Inns (2005-2019).

In 2012, she chaired the Referendum Commission for the Children Referendum (Art. 42A). She was previously a member of the Law Reform Commission and the Constitution Review Group chaired by Dr. TK Whitaker.

Ms. Finlay Geoghegan is a graduate of University College Dublin (Maths/Maths Physics) and of the European College, Bruges.