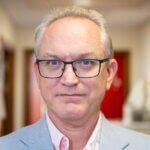 Medical graduate of University College Dublin, Ireland in 1987. Returned to Ireland in 1997 after training in the United States at Washington University Medical Center in St Louis and was appointed as a Consultant Paediatric Pathology Laboratory Medicine in the Children’s Hospital Group.

He is a Fellow of the Royal College of Pathologists, a Member of the Faculty of Pathology of the Royal College of Physicians in Ireland and an associated member of the Faculty of Paediatrics in the same college. Formerly a member of the Irish Medical Council fitness-to-practice jury panel and previously served as vice-chairman of the Medical and Scientific Advisory Committee of the Irish National Accreditation Board, the organisation responsible for laboratory accreditation in Ireland. Member of the Board of TLM, (Ireland), a charity that supports paediatric oncology in Tanzania.