Clinical trials provide the strongest evidence base to select the most effective and safe medicines and treatments, however, conducting these requires resources and expertise. Together with the Clinical Teams, we are striving to increase the number of studies to ensure that more children have the opportunity to participate in, and benefit from, research within the the hospital and wider research community. 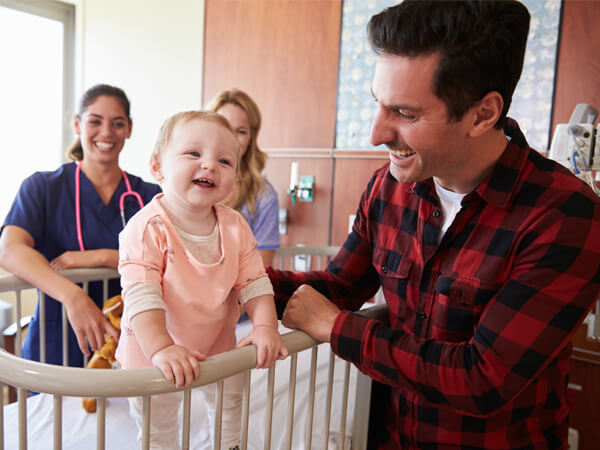 The CCRU represents paediatric clinical trials and studies in Clinical Research Infrastructure Ireland (CRCI), the agency that provides centralised support in the conduct of multicentre clinical trials (both commercial and academic) across Ireland.

The need for Paediatric Clinical Trials

Research drives progress in medicine and clinical trials are an essential step in providing an evidence base for improved medicines and treatments.

Conducting paediatric clinical trials presents particular challenges. The vulnerability of children brings increased safety concerns around testing medicines. There are additional ethical considerations such as the lack of capacity to understand risks and give informed consent, and the need to minimise distress and discomfort. The pool of eligible children for trials is often small, and as a group they are disproportionately affected by rare diseases which first manifest in childhood. Given the increased complexity and smaller populations, there can be a higher cost associated with paediatric trials.

Historically these factors have led to an avoidance of clinical trials in children and a situation where most of the medicines currently given to children have only been tested in adults. However, the medical needs of children are not the same as those of adults. From 0.5kg premature neonates to over 100kg adolescents, they are not a uniform population and as they grow and develop, their physiology changes.

Lack of safety and efficacy data for medicines for the different age groups means that medicines for children are commonly prescribed off label. This poses risks in terms of lack of efficacy, overdosing or unseen side effects into the future. Medicine formulations appropriate for use in children also need to be developed and tested, for example liquid syrups or drops instead of tablets or injections.

It is clear that children need drugs and treatments that are tailored to their needs, their diseases, their size and how their bodies work, and to achieve this, there must be an increased number of paediatric trials.

Recent regulatory changes have sought to address this by making paediatric clinical trials a mandatory part of drug development. Since the introduction of the EU Paediatric Regulation, there has been a steady increase in the number of paediatric trials and this continues to be a major driver of an increased levels of activity.

Conducting paediatric clinical trials requires specialist expertise. The existence of clinical research infrastructure at a hospital is a key factor in attracting clinical trials and in 2010, the Children’s Clinical Research Unit (CCRU) was set-up by the NCRC to provide this.

We are a dedicated team, committed to supporting clinical trials and studies to ensure that children in Ireland can access high quality and evidence-based treatments. With the increasing focus on paediatric trials internationally, it is our aim to ensure that Clinical Teams have the support necessary to conduct these studies in Ireland.

Strict governance is in place to ensure that clinical trials are conducted in a safe and ethical manner. All research supported by the CCRU is conducted in accordance with the applicable legislation, regulation and guidelines including:

The following national and local governance and oversight checks are in place to ensure studies are carried out in accordance with these: